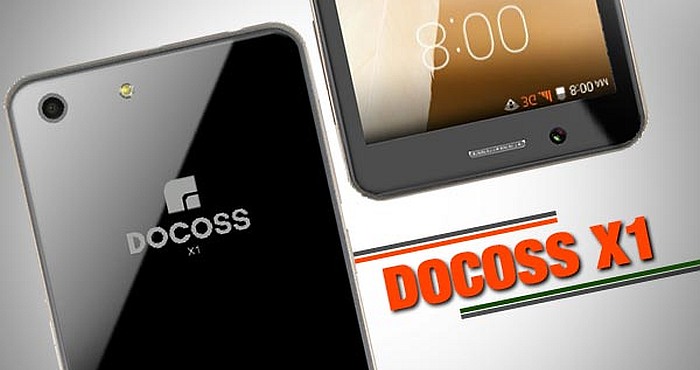 First, it was Freedom 251 and now it is DOCOSS X1. New startups from India are offering smartphones for as low as $4. Freedom 251 was offered for around $4, but the company received a lot of negative attention from the Income Tax department and had to face a lot of issues. The bookings are now closed for the phone and it remains to be seen whether the deliveries will be made or whether it was all just a big scam. Now we’ve got another company from Jaipur, India, selling their first smartphone for Rs.888 (around $14).

We’ve all seen phones under Rs.1, 000. They have the alphanumeric keypad and a small display ranging from 1.2-inches to 2-inches. But if you were expecting something similar, in the DOCOSS X1, you are wrong by a big margin. The DOCOSS X1 comes with a 4-inch IPS display with a resolution of 400×480 pixels. It also supports 5 point multi touch. The phone looks quite decent considering the price at which it is offered. The rear side of the phone has a huge branding of DOCOSS and is given a mirrored sort of a finish. It is made of plastic so it will definitely attract scratches.

There is some decent hardware inside the DOCOSS X1. It is powered by an ARM-Cortex A7 dual-core processor clocked at 1.3GHz. It even has a decent amount of RAM at 1GB. The phone comes with the old version of Android, KitKat. But considering everything else about this phone, people aren’t going to complain about the version of Android. The phone has support for both 2G and 3G networks, and even supports dual SIM. For storage, there is 4GB of internal storage and it can be expanded up to 32GB via microSD. DOCOSS has done a pretty good job with the DOCOSS X1.

It has a 2MP rear camera and a VGA camera at the front. Considering the price point, this is quite great. It even comes with a flashlight at the rear. 2MP might not sound like a lot, but it is quite decent and the pictures would have enough details. VGA cameras are as good as dead right now and that shouldn’t have been there in the front. But nevertheless, it can be used for really low quality selfies. DOCOSS X1 is a phone that can create a revolution if everything goes right for it. The phone’s booking is currently closed and there is no confirmation as to when it will be open again. Those who’ve booked the phones will hopefully receive it in the near future.

Posted in News Tagged with: Smartphone